The opposition has nothing to stand on, the Gays win the day and California leads the country forward… again

Screaming Back at the Screen is a HUGE fan of marriage equality because we LOVE our tremendously enthusiastic gay fan base (ok… so it’s really just a couple of our gay friends but that’s a mere technicality).

In all seriousness, we were delighted and honored to officially witness the marriage of our lovebird friends, Sean and Joël,  who solidified the foundation of their little family by tying the knot back in December. We were thrilled to sign on the dotted line of their newly minted marriage license which attested that, yes, these two ball-and-chains should be chained together for all eternity, raising their wonderful children together and continuing to provide SBATS with all the fun and laughs we have always enjoyed when invited over to their home that’s been affectionately dubbed “dinner and a show.”

So we were beyond interested when we saw that our favorite pay channel, HBO, was broadcasting The Case Against 8, the award-winning documentary about the fight against that horrible Proposition 8 amendment  that we voted against when it was on our California ballot some years ago after the California Supreme Court upheld the rights of our local gays to marry.

We hoped that it would be in the same vein as that other fine marriage equality documentary — The Loving Story  — which told the story of this lovely couple’s historic legal case that ended with a victory at the U.S. Supreme Court, overturning the laws that prohibited interracial marriage in this country.

We were not disappointed.

The film opens with former U.S. Solicitor General (and, according to some pundits, conservative movement turncoat)  Ted Olson practicing arguments that will eventually be presented to the U.S. Supreme Court. He’s joined by co-counsel  attorney David Boies, who, having grown up in California, “…was disappointed with the people of California” for approving Prop. 8, after they had been on opposite sides in the Bush v. Gore debacle that gave us eight years of George “Dubya” Bush.

After an extensive recruiting and vetting process, they and the American Foundation for Equal Rights  found two gay couples who were willing to put their and their  families’ lives on the line for the right to marry. Kris Perry and Sandy Stier, mothers of four sons,  and Jeff Zarrillo and Paul Katami signed on as plaintiffs in Perry v. Schwarzenegger. 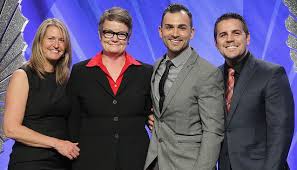 After our former Governator declined to defend Prop. 8 (possibly Arnold Schwarzeneggar‘s smartest move as governor), attorney Charles Cooper stepped in to represent the Yes on 8 faction in the federal court of Judge Vaughn Walker who ultimately ruled in favor of the plaintiffs.

After back and forth rounds between the federal and state courts, the plaintiffs advanced to the big league, the U.S. Supreme Court, where it was bundled with the Defense of Marriage Amendment (DOMA) case. The Supremes ultimately decided that the Yes on 8-ers didn’t have legal standing to defend Prop. 8 which killed it off and allowed all California gays to be married. Yay!

The team behind this documentary obviously knew a great story when they heard one because The Case Against 8 has all the makings of a good legal thriller: good guys, bad guys,  guys in black gowns,  a couple of villains (one of whom has since changed his view on gay marriage), back-and-forth drama, and finally, a resolution that allows the good guys (and girls) to live happily ever after.

Access to the staff at American Foundation for Equal Rights, the lawyers and the plaintiffs and their family members allowed the filmmakers to record the case from start to finish: the strategy sessions, plaintiff interviews, argument preparation and practice, and audio from the Supreme Court itself accompanied by those court artist illustrations that rarely make anyone in them look good.

Unfortunately there was no word on whether the opposition lawyers or supporters were approached to provide any commentary on their part of the case. Throughout the film, news footage from various sources is included so some of the opposition is heard. But it would have been particularly interesting to hear from William Tam whose testimony was not based on anything scientific but merely loaded with his own anti-gay views from his reading on the Internet .

Stiers and Perry with one of their sons at their wedding.

Once their legal rollercoaster stops and they pull into the station victorious, we witness our plaintiff couples get ball-and-chained-up by California Attorney General Kamala Harris  and former Los Angeles Mayor Antonio Villaraigosa.

Who said being a pioneer was easy? Fortunately, these two couples were willing to bite the bullet for themselves and other gay couples and as they say, as California goes, so goes the nation. In recent months, we’ve seen gay marriage court victories from sea to shining sea as these archaic and unfair prohibitions fall and people really seeing gay people for what they are… regular people who want good lives and stable family relationships just like all of us straight people.