Mad Men takes the left coast by storm and L.A. finally gets her close-up

Screaming Back at the Screen has been a HUGE fan of Mad Men since its impressive debut in 2007. And the reasons are many: great writing, great acting, stunning attention to detail in regards to the period costumes, sets and props,  historical accuracy of the storylines, and of course, Jon Hamm is very hot and never ever bad to look at.

So we applaud Mad Men‘s move to 1960s Los Angeles. Present-day Los Angeles is home to SBATS and our rabid fandom of our city and this fine television show grow exponentially and more intertwined with MM‘s showcasing our beloved city back in its groovy heyday before Charles Manson and his flock of killer sheep went around making it scary to have a hillside canyon as a backyard.

So far, Canter’s Deli, The Dresden and the La Brea Tar Pits  have made appearances or been honorably mentioned and the miracle workers of Mad Men‘s art departments have even managed to make our local travel hovel, LAX, appear to be a hip, happening place (but then again, this was the ’60s when air travel was more exotic and airports actually had a cool factor). The  house that does double duty as whorehouse and Pennsylvania childhood home of our drunken, dysfunctional and continually tormented anti-hero Don Draper is located in our fair city.

The local blogosphere is taking note and disclosing these hot spots to the delight of local Mad Men fans. Franklin Avenue, created and curated by one of the editors at TV Guide, has been chronicling the locales around Los Angeles that are starring as our wonderful city. A lot of the locations can be seen on this page of their blog. Curbed LA has done their homework as well cataloging all the local stomping grounds doing stand-in work for New York on the series.

And what would the 1960s be without those groovy California-influenced fashions? We tried for those looks when we lived in Michigan (‘we’, this time, being SBATS and her groovy older wannabe-psychedelic siblings) but our ensembles just didn’t have the authentic oomph factor of what was being broadcast from California in those days.

The women of Mad Men and the mad man who loves them.

But front and center of all this ’60s fashion action is Jessica Paré, who as Megan Draper,  has the internet conspiracy theorists buzzing with so many of her looks channeling the late actress Sharon Tate.

Her hairstyles, babydoll dresses, some in Pucci-esque prints, and most of all, her mediocre career and new swinging pad that overlooks a canyon are all reminiscent of the very doomed Ms. Tate. Will Mrs. Draper suffer a similar fate? Only executive producer Matthew Weiner knows.

So for those of you who long for those days, check out another great blog that makes chronicling those fabulous frocks part of their mission. Tom & Lorenzo  not only features the costume choices of Mad Men‘s stellar costume department but also goes into in-depth analysis of the characters through the clothes they wear.

Sadly, like a bad afternoon on our 405 freeway, Mad Men’s California adventure comes to a screeching halt on Sunday, May 25. 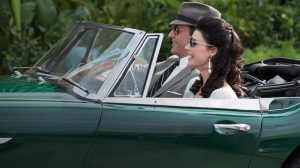 Network AMC has broken the final season into two parts to milk it for as long as possible (double dipping into the Emmy Award and ad dollar pools, are they?). Until then, dear readers, don’t wallow in despair. Our fair city awaits. Go out, see the many sights, hit the beach and enjoy the treasures of our beloved city while the weather is good and the martinis are ice cold. Don Draper will return.