The first work of the artist’s most prolific period

Jackson Pollock’s masterpiece, Mural, is now on display at the J. Paul Getty Museum in Los Angeles through June 1, 2014.

Sent to the Getty for conservation, Mural measures 8 feet high by 20 feet wide and is housed in two galleries. The first gallery displays the painting and the second is devoted to discussion of the materials used in it and the conservation effort completed by the museum’s staff. The canvas has been part of the permanent collection of University of Iowa Museum of Art since its donation to the institution in 1951 by Pollock’s patron, art collector and dealer Peggy Guggenheim.

Painted in 1943 for Guggenheim, Mural graced the front entryway of her New York City apartment and was the first of his large scale pieces. It predates the transition to the “drip” paintings that brought Pollock his biggest period of acclaim.

Of his creation, Pollock said: “It was a stampede…[of] every animal in the American West, cows and horses and antelopes and buffaloes. Everything is charging across that goddamn surface.” Inspired by art from various sources including Native American, the painting may have been reminiscent of his childhood memories while living in Wyoming and Arizona.

Considered one of the first post-war Abstract Expressionist artists, he was identified as an “Action Painter” whose work has an aggressive style to it: the paint is dripped, thrown or splashed across the canvas as opposed to being stroked with brushes in an orderly manner.

Photos of Pollock at work during this period show him using these methods to create these paintings. 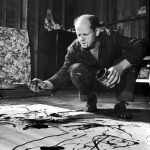 After the debut of Mural in Guggenheim’s home, critics took note of Pollock’s work and widespread fame followed. He and his paintings were featured in Life and other magazines of the day.

Besides being remembered for his work, Jackson Pollock was immortalized in the eponymously named film starring Ed Harris and Marcia Gay Harden. Harris directed and starred in the film and was nominated for an Academy Award for his role as the artist.  Harden won an Oscar for her portrayal of his wife, artist Lee Krasner.

The J. Paul Getty Museum is located at 1200 Getty Center Drive in Los Angeles. For more information, call (310) 440-7330 or email the museum at gettymuseum@getty.edu.